Using Myriad Playout v4 I found myself wanting to pre-fade the next song without it affecting the backtiming or dashboard for what was playing on air at the time. I wanted to use the fader I was going to be eventually playing the item on air from. In order to achieve this I have used the Myriad Command language to force players into and out of Preview Mode.

Below is a pdf of how I did this. Enjoy

I have made a video to show how to create a script in Windows to move, rename and delete items from a dropbox folder. As part of the rename it adds a cart number to the file which the Auto Importer then uses to place it correctly on the AudioWall.

ipDTL – replacement for Skype in Studio?

Below is a little document I made up after upgrading the Myriad Playout system at Hospital Radio Chelmsford (www.hrc.org.uk). It uses SQL Authentication as the method of linking to the database rather than windows authentication but this should not be a problem for station running less that 10 playout instances.

Hope you find it useful for your install.

1 – Backup all of your ‘Myriad’ folder contents.

1 – Run Windows update to ensure machine is up to date.
2 – Install Native SQL Client software on machine
3 – Install Myriad Autotrack
4 – Connect to SQL server using SQL Authenication with user details you created on server (this allows anyone to log onto windows on the machine and it not affect the access to the Database).
5 – Once Autotrack is installed and licensed go to File – Import/Upgrade Database and choose your Autotrack Database found in the ‘Autotrck’ folder on your server. This upgrade can take some time and your system will look like it is not responding but just leave it alone!
6 – Run the user importer tool to import your current v3 users.
7 – Run the application and ensure it loads correctly and click on ‘allow’ to any firewall requests. 8 – Run the firewall exceptions batch file on workstation.

1 – Run Windows update to ensure machine is up to date.
2 – Install Native SQL Client software on machine
3 – Install Myriad Playout 4 – Connect to SQL server using SQL Authenication with user details you created on server (this allows anyone to log onto windows on the machine and it not affect the access to the Database).
4 – Run the application and ensure it loads correctly and click on ‘allow’ to any firewall requests. 5 – Run the firewall exceptions batch file on workstation.

1 – When entering the server details do not leave anything of the pre-existing text before /SQLExpress. If your server is on a domain you may need to enter the whole domain string rather than just server\SQLEXPRESS.

So on Monday 1st April we mark the end of Hospital Broadcasting Week 2013. This is the annual week where hospital broadcasting in the UK is publicised and shouted about.

The event began with the Hospital Broadcasting Associations annual conference and awards ceremony held this year in Blackpool. It ends on monday with over 30 stations sharing the output from Richard Smith who runs the A to Z of Pop website.

This is his third ‘Big Broadcast’ and this time in association with the HBA he has been asked to broadcast for 24 hours from midday on Sunday to midday on Monday. This is a great concept of stations coming together over a period of time where they may be difficulty in getting live presenters on the individual stations. I spoke to him recently on my podcast here and he explains a little more about his past broadcasts.

Richard sees this kind of syndication/networking growing in the future and so do i as the need to have presenter led output rather than jukebox output on Hospital Radio stations increases. I wish him luck and will be listening – why not tune in via the website yourself?

I will be live tweeting the National Hospital Radio Awards this coming Saturday, 23rd March, from the Hilton Hotel in Blackpool.

I am doing this for Radio Today and the tweets will be on this website – http://radiotoday.co.uk/live/ or if you are on twitter then you can follow @radiotodaylive

Not quite sure what the hashtag is for the event but keep a watch out there for all the info if you want to keep across the event.

At HR Chelmsford we have recently upgraded one of our studios or really just made a new studio in what was the production area. We installed another copy of Myriad and purchased a mixer from Psquared – the SRM which integrates with Myriad via USB. The next thing was software to enable us to run a newsroom efficiently compiling our own bulletins from material provided via IRN and self written local stories.

I came across Airscribe from Impishfish and version 2 of their software. Last week Ken, who runs the company, kindly came down to visit us and check over the system and give us some training. There are a few bugs with it at the moment which he is working on ironing out for us but I am pretty happy with it.

There are some details on the Impishfish website but basically it pulls down the text and audio from the IRN Net Newsroom plus text from any RSS feeds you put into it. You can then add these stories along with any locally written content which you can attach audio files to into a bulletin. You can re-arrange the bulletin running order and then when you press on read the screen fills up with the bulletin which you scroll through with the arrows keys pressing the 0 key when you want the audio to play.

Very simple and for HR and community radio stations good value too.

With the installation of our newsroom software we needed a simple recorder for use by the News team to record audio cuts and so I visited my friend Charlie’s Site to see if he had something suitable and he does. It is called ‘Urecord’. You can use F keys and also some other shortcuts keys to create a new recording, record and stop recording, play, top n tail the audio and save it. It records as .wav files and it really is nice and simple to use. Charlie and I are working together to improve it but if you are looking for a simple audio recorder for your studio I can recommend this and for only £15 it is a bargain. 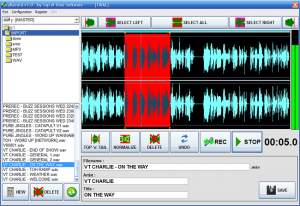 I have been meaning to write something up from my visit to the Pudding Club for years now. I went in 2009 after waiting for years to finally sort it out.

So what is the Pudding Club? It is a club based at the Three Ways House Hotel in Chipping Campden in the Cotwolds. They now seem to meet every Friday evening but it is normally the 1st and 3rd Friday of every month – more dates etc on their website. The idea is you have a small main menu which isn’t too filling and then you eat your way through 7 puddings scoring each one as you eat it. The aim is to eat all 7 and then go back for more of your favourite afterwards. The whole room (80-ish people) vote for their favourite and one is declared the winner at the end of the night.

We stayed over in one of their normal rooms (pudding themed rooms are available!) afterwards which was great as we were stuffed and just wanted to flop after the meal although we weren’t tired due to the amount of sugar we had consumed!

I would thoroughly recommend it, certainly in the winter months when the big puddings are on. I will be going back at some point I’m sure.

More details are available here and please see the comment from Jill at the Pudding Club who kindly wrote in the comments.

Last week I attended the Nextrad.io conference at the Magic Circle in London. As with most radio things I attend I have various hats on when listening to people talk. I have my BBC World Service hat on most of the time but I also have a Hospital Radio hat on having been involved in HR for over 20 years and I also have a podcasting hat and general radio loving hat on too. So I was greatly looking forward to this event.

It was designed for people who ‘do’ radio and I would say I ‘do’ it in various places. The talks were short, either 9 or 18 minutes long. This meant a packed programme. Here are some things I took from the event.

Nik Goodman spoke about the Top 5 things that work in radio across the world – Entertaining, Emotion, Creativity, Storytelling, Honesty are the things I got down. It was an enjoyable talk.

Francesca Panetta from the Guardian Audio team spoke about why podcasts are different from radio. I have podcast since October 2005 and although have been quiet with my podcasts recently is something I am interested in still. Her main points were

Steve Martin (who I have a bizarre relationship with, having done some work with him in the past and have spoken to on the phone but he doesn’t know what I look like in public yet we work in the same building) did a talk about Creative Perils which he has put on his website was enjoyable and made me think about promotions in radio.

The Prison Radio association spoke about their work in the UK and it was an interesting talk and one I could turn around to my work with Hospital Radio. They had some targets for their radio.

Paul Chantler (a man who employed me once but probably didn’t know he did) spoke about Libel and Slander which although not a sexy subject did make me think about the way many Hospital Radio stations probably break these rules all the time and that they need to be careful – perhaps I should ask him to attend an HBA conference?

Steve Ackerman from Somethin’ Else spoke about the company and some of the projects he has been involved in and it was refreshing to hear about audio being used outside of radio. As a technical sound person it also gave me a little view as to something else I could do with my audio/radio skills outside of the BBC. They have worked on a iphone app called Papa Sangria and did some work with Wrigleys on a game called Nightjar – both of which are audio based games.

The final session which made me write things down was from Dick Stone. All about prep and he has written this up on his blog here so again won’t recite it.

I must also mention Mark Channon who did a session all about remembering things. This was a breath of fresh air and acted as a good ‘wake up’ session during the afternoon.

Conclusion – it was an enjoyable day and I did learn some things I could take with me but I think mostly it showed me what else is going on around the industry. It is quite easy to remain enclosed within the BBC bubble but in these changing times it is important we all look out else we could find ourselves outside the school gates without any friends. Hopefully another one next year.